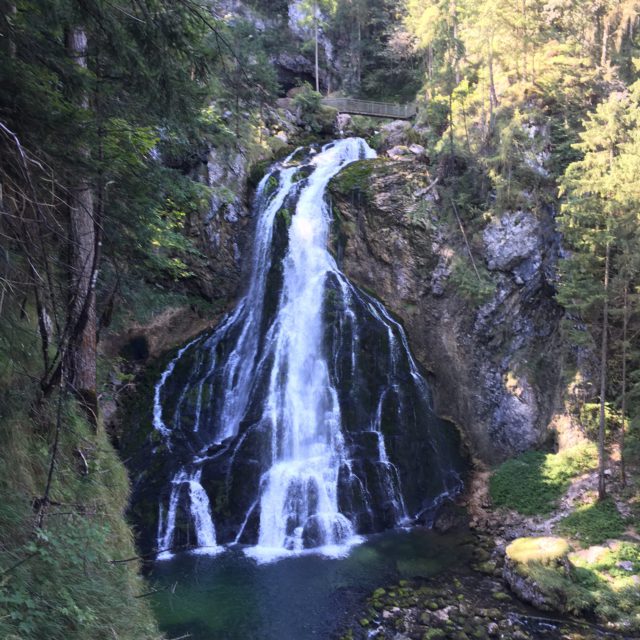 The Waterfall of Golling

The Golling waterfall, originally called Schwarzbachfall or Schwarzenbachfall, is a waterfall located in the Tennengau (Austria) on the municipal border between Golling on the Salzach and Kuchl. It is at about 30 kilometers (18,6 miles) from Salzburg and at about 10 kilometers (6,2 miles) from Hallein, the municipal city of the Tennengau. The waterfall has a drop of around 100 meters (around 300ft.) and comes directly from the Schwarzbachfall cave.

two waterfalls behind each other at the Göllmassiv mountain

The Golling waterfall consists of two consecutive waterfalls located on the eastern slope of the Göllmassiv, to the left in the Salzachtal at the Nikolausberg above the pilgrimage’s church. It has a drop height of 75 meters (around 230ft.), with the last stage having a height of 25 meters(ca. 75 ft.). The upper stage is covered by a natural bridge. You can walk the whole way up and get real amazing impressions of the waterfall and the cave were the water comes to the surface.

The waterfall gets all its water from a karst source, which drains the Göllstock mountain, and comes through the system of the Schwarzbachfall cave. The cave portal is 5 meters (ca. 15ft.) wide, but only about one meter high, and little deep. A recent suspected outflow from the Königssee could not be confirmed by recent researches. In spite of all this, colored water seems to be found in the Golling waterfall starting from a certain place in the Königssee – so maybe there is a connection. There is also an old Celtic legend, which I shall return to later. 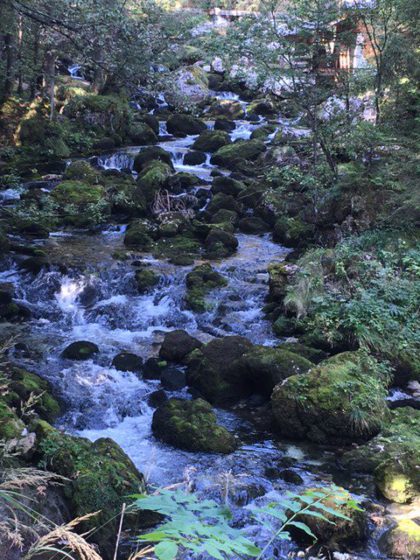 The waterfall and the power to it

Passing by two decaying mills, which are located directly at the brook you are on a lovely and romantic way. Along the way there are always benches.

Even if the vegetation seems alpin – the start of the waterfall is at 500m altitude, so not even 100m above the height of the city of Salzburg.
From the foot of the waterfall you can see two bridges in the upper part, called the Witch’s Cauldron.
The climb on the left side of the waterfall can be done up to the level of the wooden bridge (safe shoes are recommended). The path is regularly maintained and renovated and made accessible to you as a visitor. From the height of the wooden bridge, the path is partly washed out, some of the remains of fallen trees are present.
The walkway is largely provided with a handrail, stairs facilitate walking across the floor and stone – the picture comes from the lower section of the excursion destination, the path to the waterfall.

The path was originally built by Ernst Fürst von Schwarzenberg. Along the path there are signs.

This path is not ideal for people with limited walking or strollers. In this case we would recommend staying at the lower waterfall. 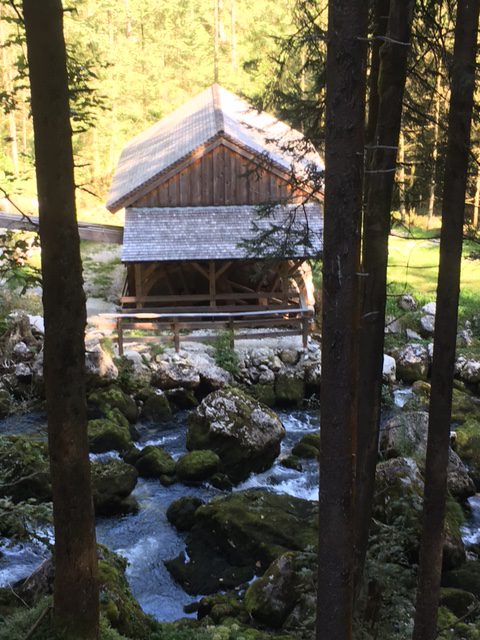 The celtic mythology around the waterfall

You will be surprised, but some people say that this place is mystically and full pf power. It is up to you to believe or not but during research lately scientists found out that the celtics already used this location as a power place on which also celtic celebrations took place.

If it was a place at which also sacrifices were made we do not know.

But also the celtic mythologies took place: It is said that somewhere in the mountain of the Hoher Göll, from were the waterfalls start, there is a place where the should of the dead strong celtic soldiers are stored in tone vases. Any girl that wants to be pregnant has to take a bath at the bottom of the second waterfall and then 9months later she should get a strong and powerful baby.

So who knows if this is the only mythology that took place there.

Another mythology is told that there used to live a white alpine goat and  whoever kills that goat will die tragically.

You see that it is a powerful and also natural sight. So enjoy this place and learn more about it.

Drive with us to the waterfall of Golling and enjoy a spectacular walk through the nature to the waterfall. Learn more about this area and the Salzach valley and see the magic of water. We are looking forward to meet you here in Salzburg. Best regards and a good travel Bespecialtours!