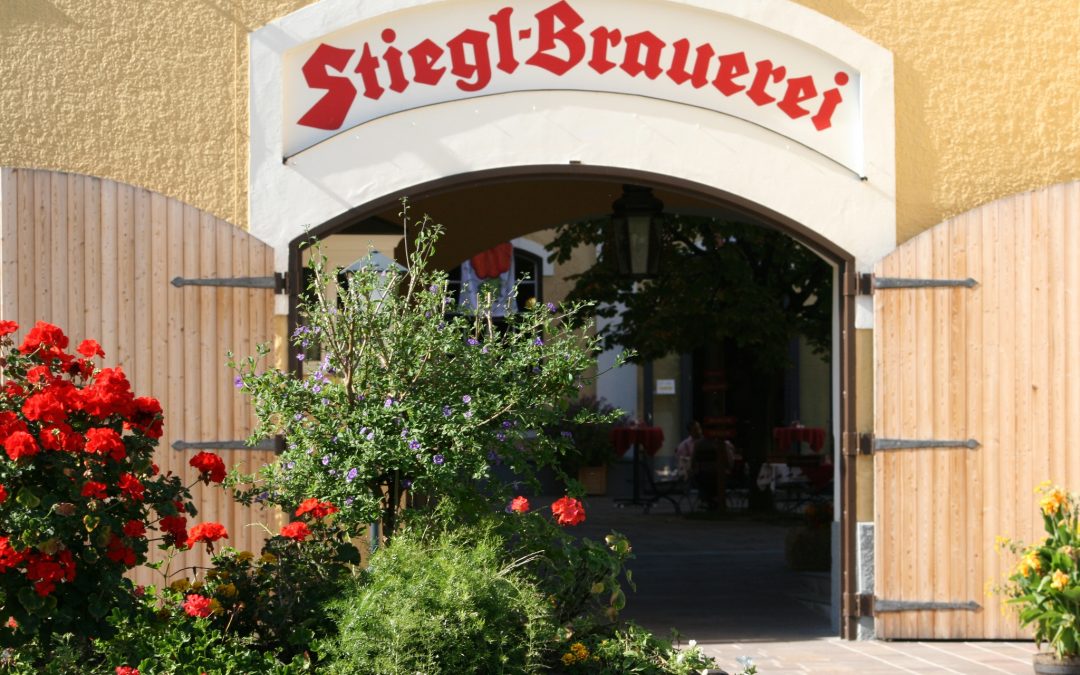 Stiegl – beer and Innovation such as ami beer, etc.

The Stiegl Brewery was founded and firstly mentioned on documents dated to the 16th June 1492. It was called “The House by the Steps” which is still the brand’s name and used in the logo (which can be found almost everywhere in Salzburg) of five up going steps.

At the time of foundation the brewery, Salzburg was a typical middle aged town and the development of the beer (going back to the Romans before christ time) was typically in the area due to the fact that beer had less germs than the water. Also the opinion of Copernicus became more and more popular and the world was not any longer flat. Of course – for our US community – America had been discovered on the 12th. October. 1492 by Columbus.

In the town of Salzburg there used to be a typically tavern near by a small river under the houses of the town in the area of the nowadays “Gstättengasse” which was first mentioned as “Bräuhaus an der Gstätten”. Actually the brewery is a bit outside of the city center and the original tavern does not exist any longer – it was directly in the old town, where the house of nature (museum) is nowadays located.

The name “Stiegl” came just a little later. It refers to a small set of steps situated next to the brew house. At the “Haus Bey der Stiegen”, brewing water was taken from the Almkanal (the small river under the town), which supplies the city with fresh water.

The old business operations of the brewery and of course the guesthouse had a very simple sequence of events. The brewer brews his beer, slaughters his own animals and accommodates strangers who enjoy the food and drink his products on their way through Europe. The citizens also dropped by in the evening for a drink or to take their beer home in pitchers and tankards. And so the oldest brewery in the city of Salzburg was founded and run as a private family business. This is something very unique until today – the Stiegl is still in private property. The name of the founder family was Huemer – this changed only one time – but it is run by the third generation of the family Kiener. On their website you can see also a picture of the actual business owner and his philosophy.

In the 17th century Stiegl was the biggest brewery in the area of Salzburg – but there were over 100 other small breweries which made their own recipe of beer. Another very important factor at this time took place in the taverns and encouraged the people to stay longer outside, drink their beer, eat well and of course chat. The tobacco was brought to Salzburg and people enjoyed to smoke, drink and chat.

In the 1780ies the most famous person of Salzburg started to drink Stiegl beer – Mozart. We know that, because it was mentioned in an entry of his sister Nannerl’s diary. The owner of Stiegl followed the custom among beer-brewing families to keep their children’s marriages exclusively within their professional’s circle. In 1765, Johann Ambros Elixhauser marries into the Kiener family. His family has also been part of Salzburg’s brewing circles. Elixhauser is a wealthy, successful businessman and the Stiegl Brewery flourished more than ever.

In the 1820ies the Stieglkeller – a still existing restaurant in Salzburg – was founded. This was also the time when Salzburg became part of Austria and was going through the time from a self-standing prince archbishop’s rule to a more provincial town. But the beer still flew 🙂

A time of ups and downs followed until the farmer and grain trader Franz Huemer had enough of this mismanagement. He took over at the Stiegl Brewery and put his nephew Heinrich Kiener in charge as director. Up to the present day a member of the Kiener family manages the private brewery.

In the year 1912 the Stiegl “Goldbräu” Märzen was registered as brand name and started his way over the world. It guarantees quality at the highest level and follows the old bavarian tradition of the “Reinheitsgebot” (more about it in the following text).

Of course the time of two world wars left their mark also in the company of Stiegl Brewery. During the times of the allied troops in Salzburg the lack of raw materials lead to a loss of quality. Of course this was not in the mind of the soldiers stationed in Salzburg. Therefore the Stiegl brewery got support from the US and high quality raw materials to brew a special american beer. So the citizens of Salzburg got their usual (at this time not so tasty Stiegl) and the soldiers their beer taste. Of course, when they were going back to the US they missed something – the Stiegl Ami Beer. Because of that event, until now one of the most important export markets of Stiegl is the US (behind Germany and Italy). So when back at home in the US, going to the restaurant or bar and finding the five red steps logo behind your bars, you know where it came from.

In 1954, Kiener brought Coca-Cola to Salzburg by founding the “Salzburger Getränkeindustrie” (Salzburg Beverages Industry). In its first year, the company produced and sold 100,000 crates of this caffeinated soft drink. In 2005 the most modern brewery was established in Salzburg. Nowadays the Stiegl brewery has over 600 employees and is a very well running company and it may be that the following patriarch of the Stiegl brewery is the first time in history a Lady, because in the following generation of family Kiener there a two girls and only one is interested in learning the business.

What really is the innovation at Stiegl? Since 2015 all their ingredients (except water) have been produced by themselves. We will come back to the raw materials in the next step connected with the “Reinheitsgebot”. 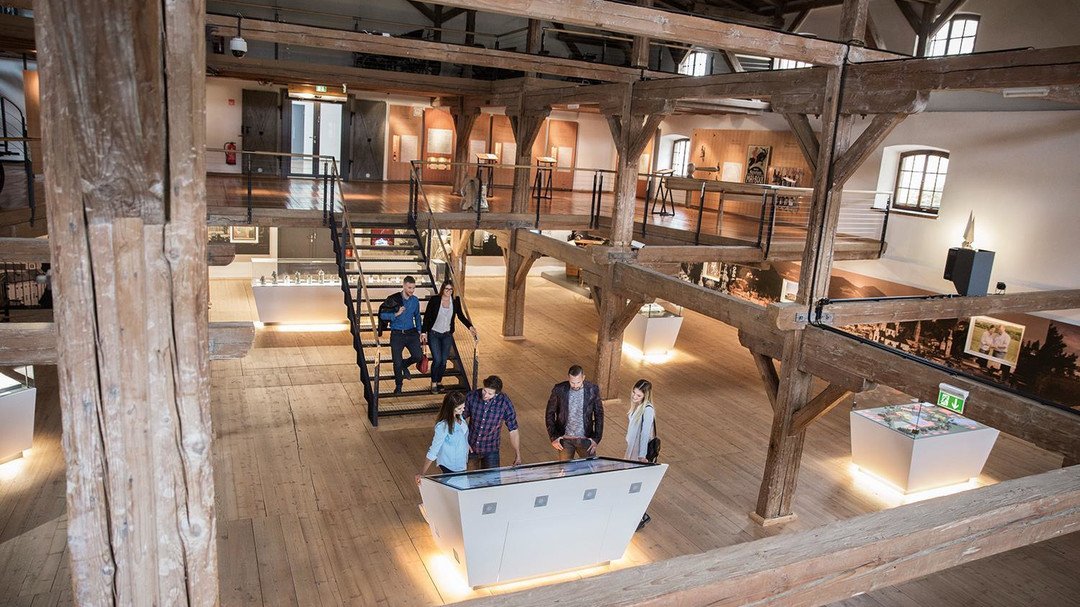 Since the year 1516 the Bavarian regulations of breweries have the purity requirements. Since the year 1918 also in the bavarian constitutional laws. This means that in a good beer there is only clear water, barley (wheat) and hops. In fact they forgot one very important thing – the yeast. There is still in the old fairy tales from the brother Grimm’s “Rumpelstiltskin” – the secret of why sometimes it is beer as result and sometimes it does not work. There is the sentence with the dwarf dancing around the fire: “today I bake, tomorrow I brew and the day after I am picking up the queen’s child” And that’s it! You need YEAST which was unknown at the time by the point of science but an absolutely necessary ingredient for funding the purity requirements to make out of the ingredients an alcoholic drink.

This purity requirements are still valid (the own choice of Stiegl) also in this brewery in Salzburg/Austria. The Stiegl beer includes the clear water from the Untersberg mountain which is filtered through the stone and brings a very important impact to the taste of the beer. So the most important ingredient is the WATER.

The Stiegl brewery has in Wildshut an own farm where wheat grows which becomes barley in a small malthouse and is then freshly delivered to Salzburg by train day by day. So the BARLEY is ready for production. In Wildshut they also plant special sorts of wheat which are only growing in this special region – but of course have an own taste and so give the beer a unique way of taste.

Still plants its own HOPS and since 2015 they can also use this for their production. So as far as I personally know this is very significant and unique here in Europe that a brewery farms and produces its own ingredients. For me personally an additional reason to stay regional and to enjoy the taste of a Stiegl and their lifestyle! So join us with bespecialtours – it fit’s to our philosophy :-)!

If you are interested to visit the Brewery and of course taste the Stiegl beer, there is a great opportunity: Enjoy a guided tours through the brewery and during week time you can also have a look to the hand production process of their special beers through a glass wall (on the weekends you see the tolls but not making of it).

You start with a 360degree image movie, then you learn more about the raw materials and can also smell them or have a taste and then you get more information about the production process of making beer (I am not going into detail here – but if you are really interested in just let us know by mail). Then you will see how it really works into a production by hand and you get an overview of different special beers of Stiegl (they make every year a special beer – for example they use old wine barrels which have the taste of wine inside and so the beer gets a special flavor). In the museum on the upper floor you will see how many different beers are available in Austria and you get an overview over the historical development of the Stiegl brewery.

Of course I want to mention a special try of the Stiegl brewery – following an old roman recipe they produced a so called “UR-Beer” in big roman ceramic amphoras digged into the earth for a year. The outcome is perhaps not the typical taste of a beer, but it is something really special. Enjoy it, if you have time!

At the end of the museum’s visit we would suggest to taste a bit the different kinds of beer and enjoy a wonderful lunch or dinner in the restaurant, where typically austrian dishes are served before heading back to the center and enjoy perhaps the night life of Salzburg!