Rothenburg takes you back into time. Some people say that this city even seems to be the ideal cities where fairytales are alive. Once upon a time this town the rivers where the main trading routes in Europe and even if it was a small river, the river of Tauber, it helped to travel from the south to the north. Already the roman road was passing by this village. In the 16th century roads were built around the Tauber’s valley and then nobody was interested to pass by this small city and fell a very big sleep. This “sleeping beauty” slept and slept and got more and more forgotten. Only in the 19th century, during the time of romanticism some artists suddenly passed by this city and started to see the beauty of a fully-intact middle-aged city. Immediately started to write stories about it. After the first world war Germany wanted to attract more and more tourists into the country and started to create touristic routes. One of them was the “romantic road” of Germany and the other very famous one is the “fairytale road”.

With this invention of the roads, the city was waken up from it’s “sleep” by “prince tourism” and the city started to see a new industry of tourism.

Even if in the second world war by accident some parts of the city have been destroyed and no money was there to help the city building up the major of the city cam up with a very creative idea: Why not ask the allied troops to help us. Unfortunately none of them wanted to help them and so the major came up with another idea:

He asked the troops to distribute a special spot on the radio to buy a virtual “meter” of the city wall. As a reward the city of Rothenburg will put up a small mark on the wall who contributed to rebuilt the city walls. This tradition is still going on and is done specially for couples that are getting married in the town of Rothenburg. 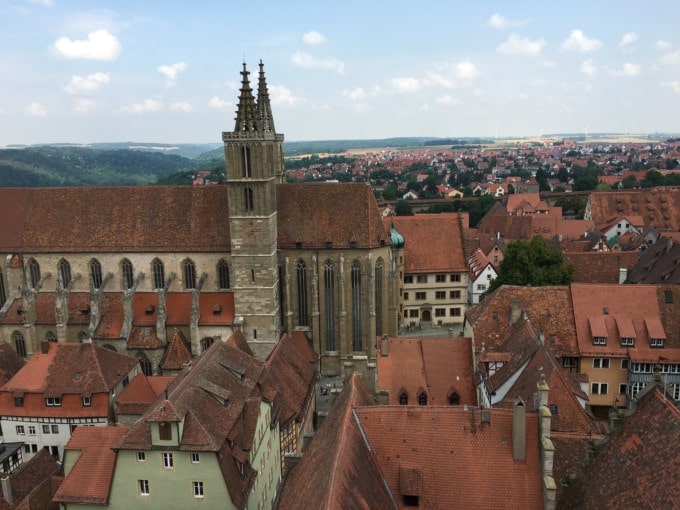 Rothenburg is a fascinating city. It brings you back in time. When you want to see how the life in the middle ages was. By walking through the town, besides the touristically streets, you will see courts and yards where you see history totally alive. You will see the different religions, different ideas and different classes lived in a very tiny place. You will explore half-timbered houses, crawl up the old city tower and see views over this old city with it’s towers, and castle like walls.

But also you can see and explore more about this medieval lifestyle during one of the events of the community when medieval music is going to be played, when medieval costumes are shown and the medieval crafts and traditions are going to be shown alive.

Besides that you can also explore the medieval torture museum. One of europe’s finest collection is held there about the medieval rights and what was an evil thing to do. From ways to separate and finish fights between women, to musicians that did not play nicely, to men that were drinking too much and women that did not stay faithful to their men. People at that time were very creative and did invent all kind of things to make their rules and torture others. The laws in each city differed and treated in a different way. See the tools they used and see this dark chapter in the cellars of Rothenburg.

One of the highlights will be to take a walk of the city walls. Not only it shows how people wanted and needed to defense themselves but also it is specially in autumn a highlight to see the nearby vineyards, grapes and the autumn leaves change their color and make the whole region in a colorful combination with the red-roofed houses of Rothenburg a perfect combination. 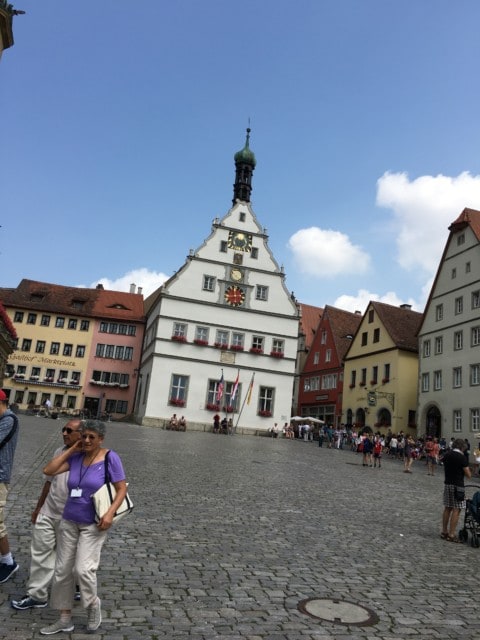 Rothenburg reflects the German culture very well and brings you back in time. It also explains a lot about some of our nowadays sayings, when you realize that one of the warmest rooms in former times was under the roof, even in winter. So cats and dogs where staying up there, enjoying the heat. When it rained the tiles of the roofs became very slippery and thus came the saying from it is “raining cats and dogs”. In Rothenburg you will realize much more of those saying and you will also learn about how Christmas is going to be celebrated in Germany. Since one of the most famous shops in Germany has it’s headquarter in Rothenburg: “Käthe Wolfahrt” and inside the shop you will find the first and biggest christmas museum of Germany. After visiting it you will go  through the shop, which is a museum y itself and coming out you will realize that the atmosphere reflects what you just saw and that christmas is really alive in Rothenburg. Already many many years ago, people needed a special day in the winter time to enlighten their houses, their souls and their mind. Christmas was celebrated and therefore made this rough and dark period of the year a bit sweeter and nicer for people to go through. 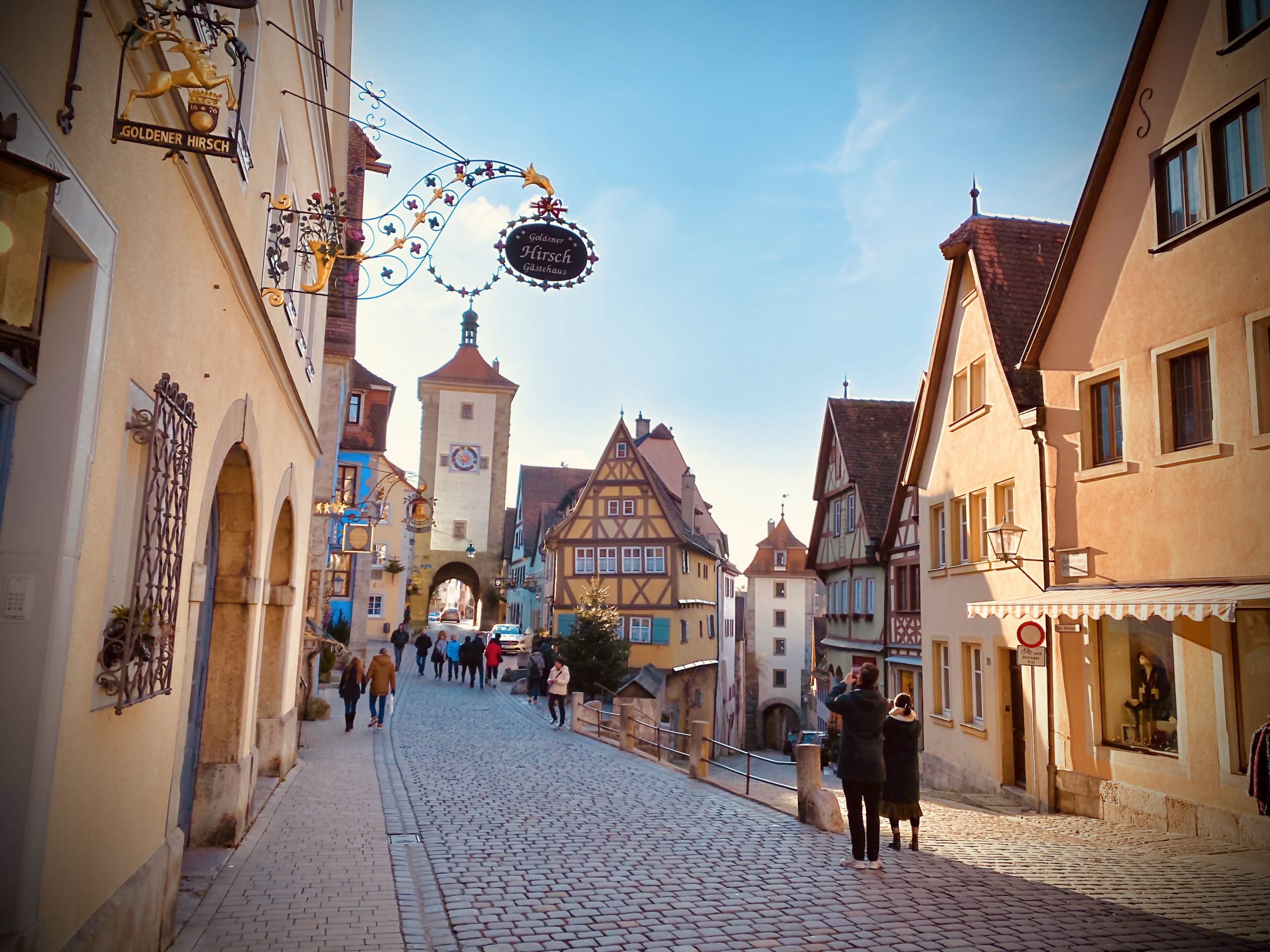 Rothenburg is nowadays not only the heritage of it’s own history but also a mirror of how medieval history can be brought alive. You will see also throughout the church history where you will find one of the best examples of wood made altars with the blood ofJesus inside and you can see that faith, strength, joy and sadness was close by each other in such a small place. But do not miss out to try one of the local vine and take the time to see also the surrounding city walls and Tauber valley, where you can explore how well this city is set in it’s surrounding. Visit Rothenburg and learn a lot of this city – history and fascinating stories of medieval time, christmas and vines – bespecialtours!

If you want to enjoy some great time in Rothenburg, book a private tour to Rothenburg with Bespecial Tours from Salzburg, or arrive directly in Munich, enjoy a city tour with our comfortable vans, enjoy a guided tour through the town of Rothenburg ob der Taube and continue a nice drive either through Germany, or Austria. So if you are planning to come to Rothenburg, or if you want to Visit the city of Rothenburg and the romantic road coming from Salzburg then please do not miss a nice ride with bespecial tours! It is fun for youngsters and the older ones and you can taste a lot of delicious typical Austrian dishes and of course a lot of Beer! Enjoy the fascinating city of Rothenburg – Rothenburg and history – with fresh ideas, food and a lots of fun – bespecialtours!