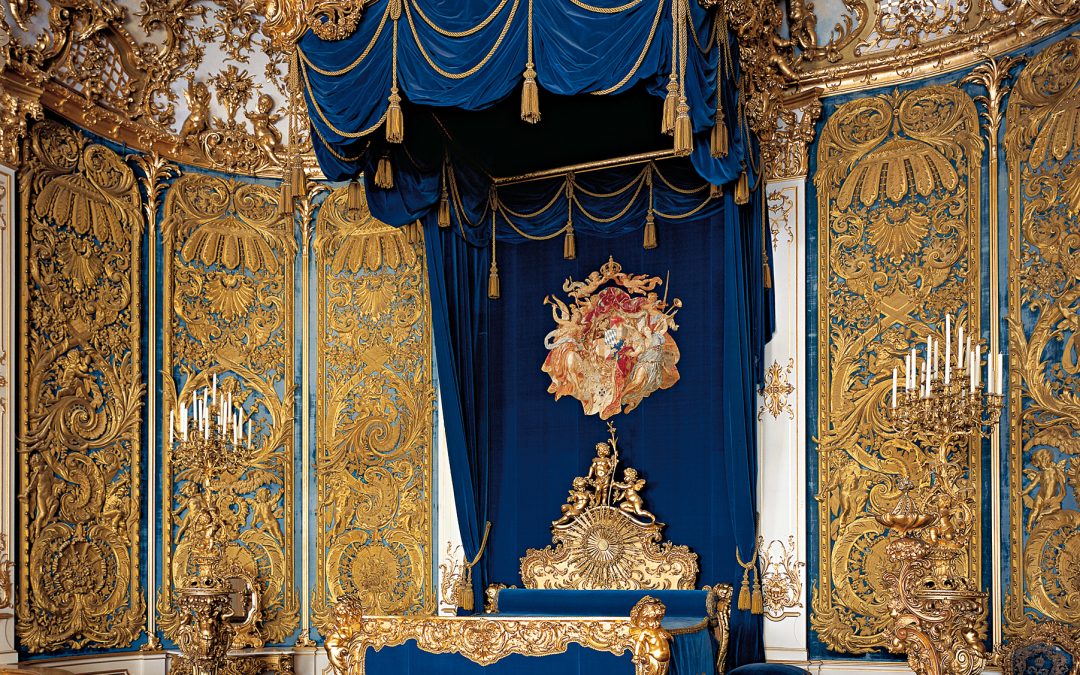 The royal palace of Linderhof is the smallest of the three King Ludwig II’s palaces. It is the only finished palace during King Ludwig’s lifetime. It is the palace where King Ludwig had spent most of his time and is therefore seen as his most beloved castle. In 1869 King Ludwig decided first to make out of a farmer’s building an addition in wood as a small mountain retreat. It was constructed in five phases. The first phase was a wooden chalet ad an extension of the farmer’s building that was owned by King Ludwig’s grandfather Maximilian II. The second phase was the addition and extension of the small chalet to the farmer’s building and in the third phase the two buildings were connected by a huge bedroom. In the year 1873 King Ludwig decided to surround the wooden buildings by a stone wall to guarantee more stability and in the year 1874 it was extended to the nowadays extension including also a new staircase and hallway. In the year 1876 the interior was finished to the nowadays extensions. In the year 1885/86 the master’s bedroom was extended and this had as a consequence a last big change to the size and rooming to the nowadays form.

In the year 1874 King Ludwig approved the construction and extension of the park. He desired to make a copy of the park of Versailles during the time of King Ludwig 14th (the sun king). In the year 1873, after becoming the owner of the Island in the Chiemsee the plans have been changed to not make a copy of Versailles any more and due to the valley space it was also not possible to make it to the extension of Versailles. Therefore a fountain that can raise up to 75ft. was made here and a cascade with over 30 marble steps due to the mountain location and leading into the neptune fountain with the so-called music pavilion. In the park King Ludwig also wanted to realize his dream of 1001 nights and made a small retreat hut in the style of Marocco with beautiful colors from the middle east and created a great new technology grotta, the so-called venus grotta. The grotta will be explained further down. Kind Ludwig forced the architectures for a very fast finish of work and therefore in the park more than 180 workers worked to finish the park as soon as possible.

The palace of Linderhof includes also elements of the bavarian rococo and includes also actual art from the 19th century. In the total construction it does not have any kind of example and can be defined as a new creation. A very important factor is that King Ludwig decided to use the wood and wood workers from nearby. It does not seem as it would have been made out of wood and then was covered then. Furthermore he invented already for the workers that they receive money, even if they would be sick at home, a very unusual thing for that time. In the year 1886 the palace and the gardens were finished and some people say that also king Ludwig finished his life idea of creating a wonderful world for himself and for the area. 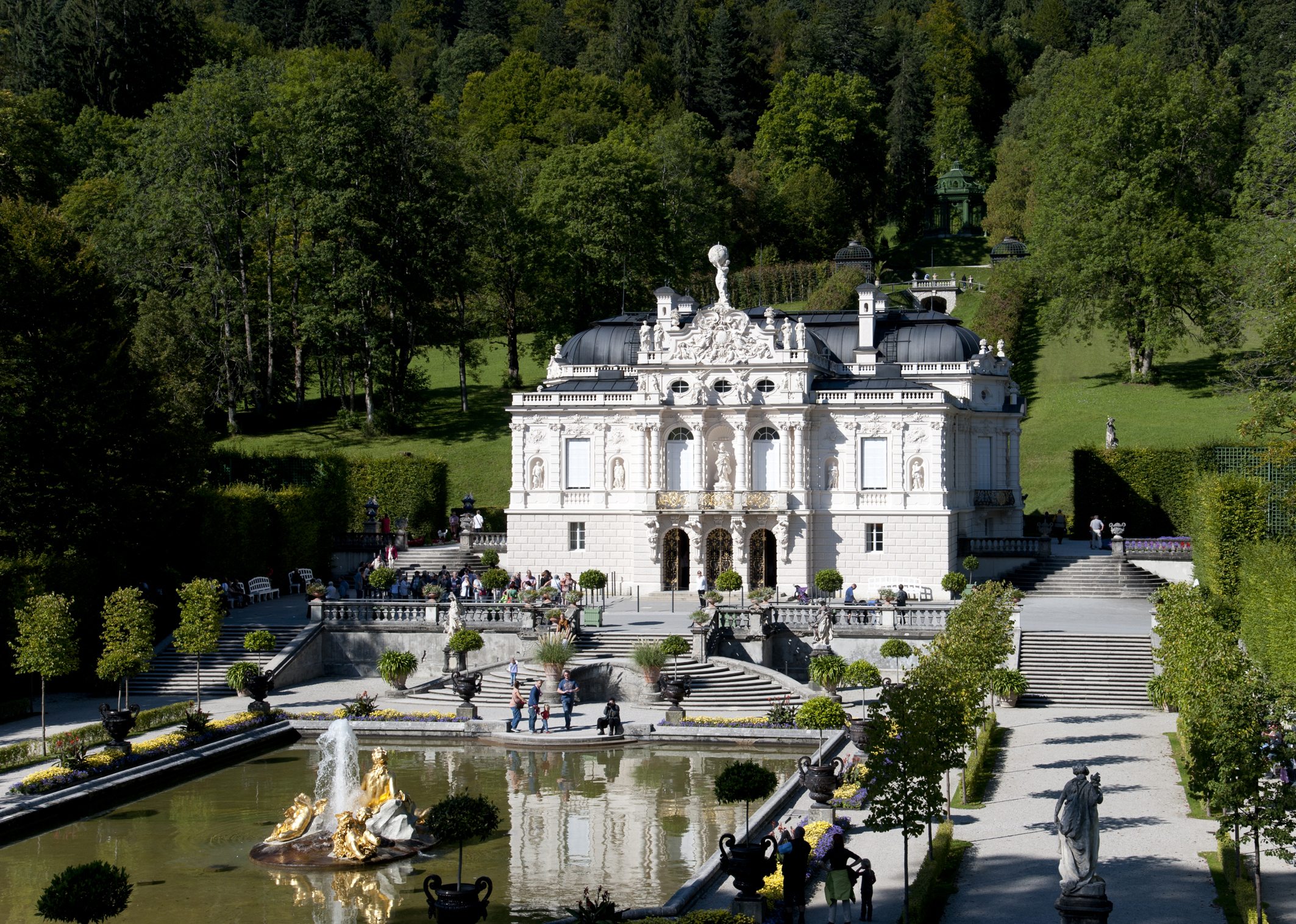 The park is one of the most important part of the palace of Linderhof. It shows in the best way how King Ludwig lived and created his world. Especially the walk in the extended park is a must at this palace where the hilly area of the park was used perfectly to create on the upper part the Venus grotta, an artificial dripstone grotta with a lake and a waterfall. It was created to the first act of the famous Wagner’s opera “Tannhäuser” (King Ludwig’s favorite composer). Besides the “king’s seat”, also a lordly rock and a venus shell in the middle of an artificial lake.

In order to strengthen his reality it was shown with floor lightning. It took them 12 dynamos in order to create the electricity for it. That was created in the electricity’s building in about 300ft. distance, Bavaria’s first electricity building. Below was a music pavilion, the cascades and the neptune fountain, before getting to the palace and the fountain in front. In the park can be also found the Moroccan building, a historical pavilion, the forbidden gate, the Hunding’s hut and the Gurnemanz Hermitage, another creation of the King’s ludwig’s fantasy world. 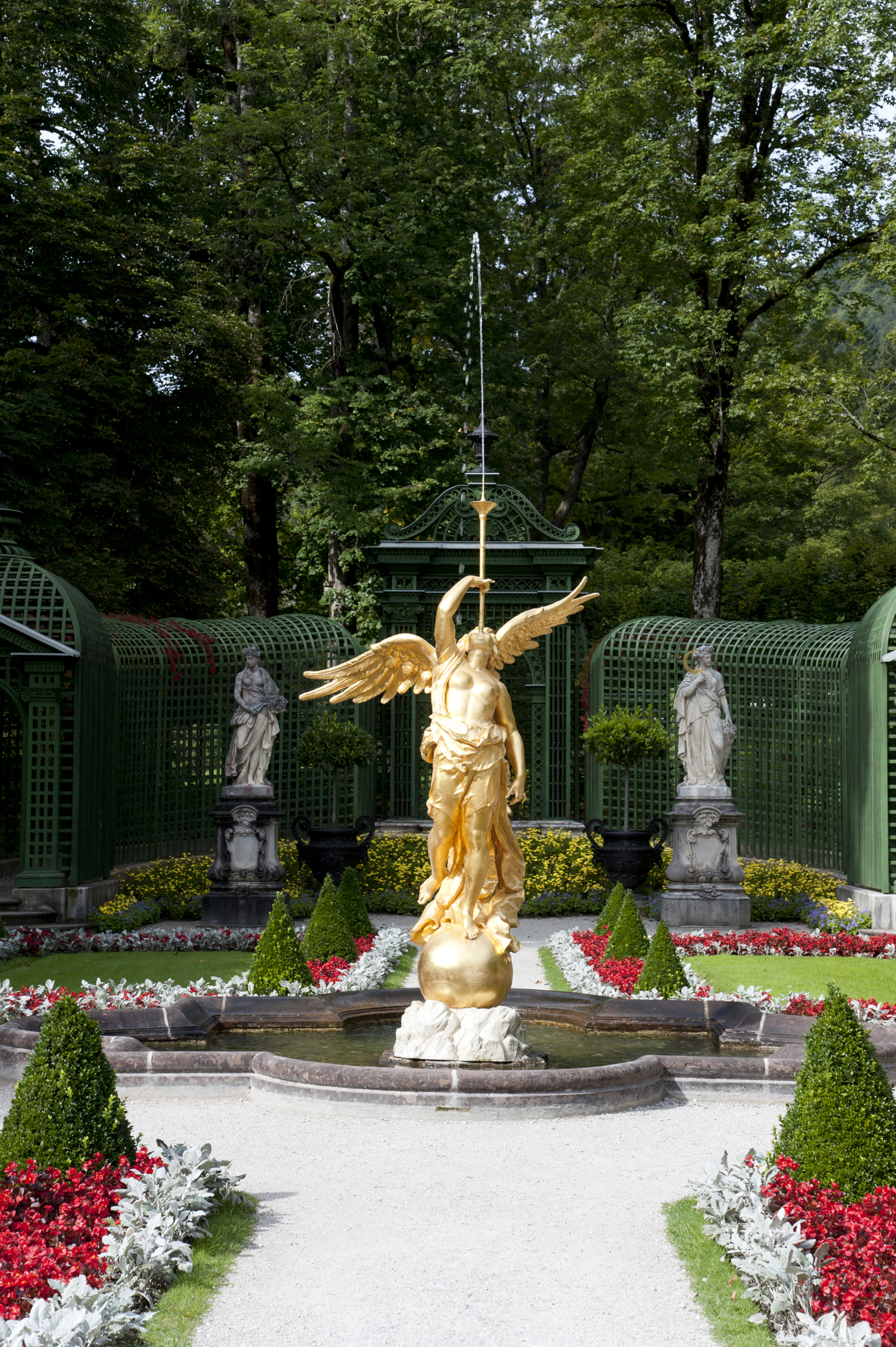 The royal King ludwig’s palace of Linderhof nearby Oberammergau and bedded in the middle of the mountains shows the only finished King Ludwig’s palace and shows his idea of of a small retreat, similar to the retreat of Versailles, called Marly and was brought to the standard of the 19th century. The highlights is the park and the small grotta. In his last will King Ludwig wanted that each palace and castle should be destroyed after his death. Luckily the Bavarian state decided differently and gives us now days the possibility to visit all of his retreat castle and his dreamworld. The palace of Linderhof was the most loved one by this king and finished during his lifetime. With almost 450.000 visitors it is the less seen palace of the three and is open almost the whole year around. Enjoy the palace of Linderhof and see the spectacular landscape around the palace. See, feel and enter the dreamworld of this eccentric king and learn why he chose place and what it brought to the area. Enjoy also the ride to the nearby village of Oberammergau, etc. it is a fascinating and great opportunity and see all the prejudices of Bavarian landscape there.

Enjoy a trip to the palace of Linderhof and the nearby area with Be special tours. Have the best of Salzburg and surrounding with B(e)specialtours!