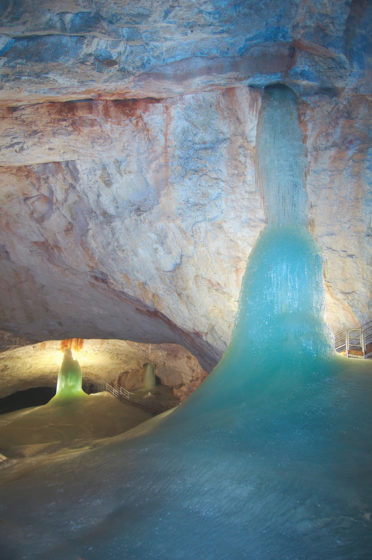 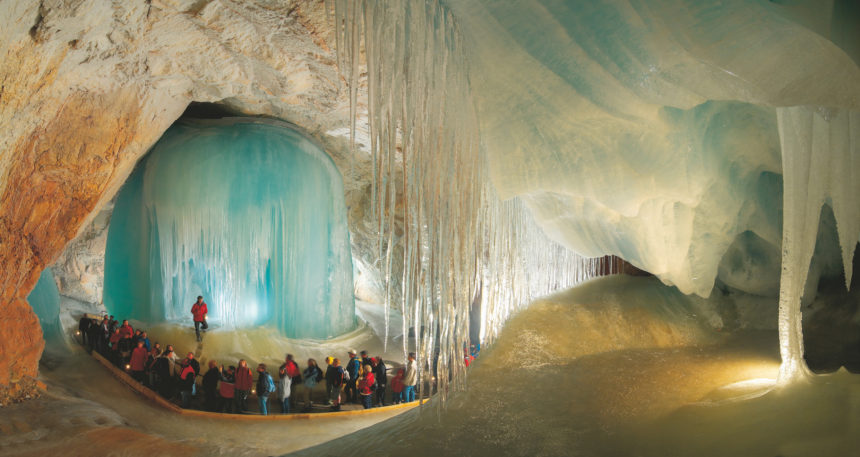 a fascination of Ice and a cave in the Austrian Alps

This cave is not only a fascinating and big cave but already the way getting there is very interesting. There is a steep road already driving the the parking from where a new designed entrance hall welcomes you and where you can see already some of the nicest crystals that have been found n the area. After that the walk to the cable car takes you either on the side of the mountain with great views or choose to go through a newly constructed tunnel and see structure of the mountain and see the different stone colors. The cable car is one of the steepest in Austria and was used also in the movie “where eagle’s dare” with the old cabins. Due to new regulations a new cable car has been installed and brings you up in safety and faster. After getting out of the cable car a restaurant with typically Austrian specialities and the hike to the entrance of the ice caves. The hike takes about 15 minutes and shows you very scenic and great views down to the Salzach river valley, the village of Werfen and the surrounding mountains. The hike from the valley up to the entrance of the Ice caves takes about 2,5h and is for well-trained hikers. First time, it was hiked was at the beginning of the 19th century when hiking became a new sport. Already in the 15th century relicts show that farmers used this path to bring cows up to the top of the mountain where food and deserted areas helped farmers to make a new living.

The first time the ice caved were discovered was in the second half of the 19th century due to the lack of interest in cave discovery and also due to the very exposed location. In the year 1879 the discoverer Anton Posselt-Czorich went by himself over 600feet into the cave and issued a book about his discovery.

Only in the year 1913 some more discoverer went into the cave. After the first world war the real discovery of the cave, the very long cave system and the possibility to constructing a way for discovering the cave and to make it open for visitors.

The touristic importance was already discovered in the 1920ies with the installation of a hut for people to sleep in and for discovery. Already in 1924 a very big house was constructed and brought for people the possibility to sleep there and do discoveries of the cave.

With the increasing popularity of the cave, better paths and more important installations were made to open it for the public. It is owned by the Austrian forest organization (a state owned company) and a high percentage of the entrance fees is going every year to this organization.

In the year 2020 an incident with falling rocks happened on the way to the ice caves and therefore new security measures for the way have been installed and will be done to guarantee a constant and safe way to the cave and back. 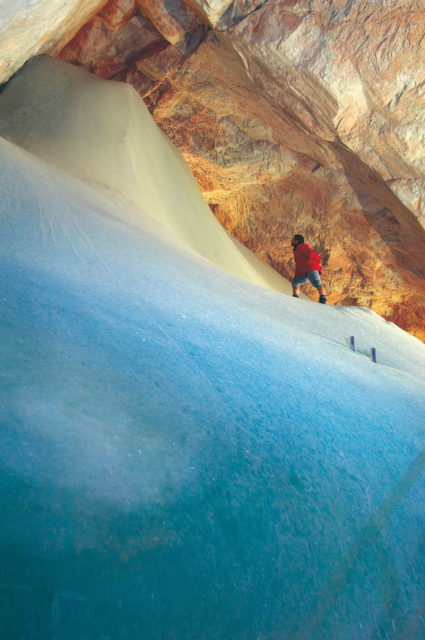 The fascination of ice and the cave

Why do the people come in this cave every year and see the fascination of ice and the darkness of the caves? The reason is jus very simple: History and the discover of the heritage and the development of the earth. Ice is the best possibility to discover different times and water contains most of the world’s DNA. With a flame ice shows the most important and fascinating aspect: light and colors. It is the most fascinating part of visiting the cave to see the different ice formations that are lighted by the guides.

The development of the cave is a still ongoing process, even if only very few inches per year the cave is still increasing as is being developed. It has been developed over 100 million years ago due to the water erosion it cute out the cave under the mountain. Over thousands of years the cave was expanded very fast. Nowadays due to the lack of the high  quality of water within the mountain it is expanded only very few. Nowadays about 27miles of the cave have been discovered and explored.

The ice cave is a dynamic ice formation and changes it’s outlook every year a bit. Due to winds, amount of water per winter, etc the ice figures can be changed and newly formatted. Each year the gate into the ice caves remain open during the winter in order to allow the ice to create the fascinating ice figures.

In the time between May and End of October you can discover the ice caves. Please be aware to take a jacket with you due to the temperature difference at the entrance it may happen that you have heavy winds at the entrance. But this is only at the entrance soon afterwards there is no more wind inside. The ice can be easily overcome by just walking up the stairs. 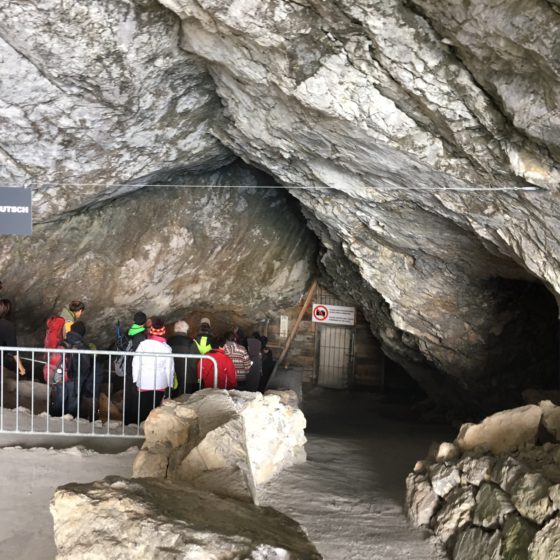 Drive with us to the Ice caves Werfen and enjoy a spectacular walk to the Ice caves and enjoy the fascination of Ice and lots of history. Learn more about this area and the Salzach valley. We are looking forward to meet you here in Salzburg. Best regards and a good travel Be Special Tours!