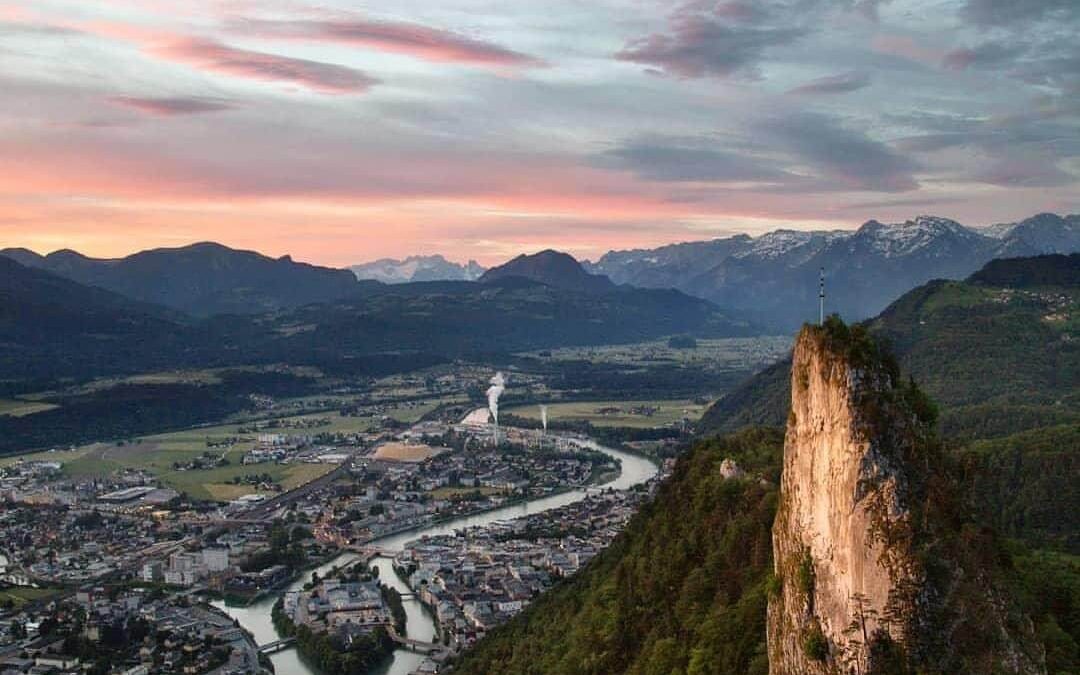 Hallein – from an industrial town to Creativity

Hallein is a city in the region of Salzburg that shows you a hard-working and salt city that brought to the city of Salzburg lots of money and nice buildings. It was a city that really established in the 12th century and is a city that is nowadays really involving into a new lifestyle city. Historically wise this town was always a very hard-working city as being the city where the salt was heated and packed, where the timber from the mountains was taken out of the river of Salzach. A very famous composer originated from this town: Franz Xaver Gruber (the co-composer of the famous christmas song: Silent night, holy night).

Timber plays still nowadays an important role in the town since the former factory of paper is used as fiber company that produces nowadays still lots of viscose textile paper and bio energy for the town of Hallein and it’s surrounding villages.

Even if in the second world war the town hosted a big factory of engines for airplanes and trucks it was not destroyed by bombs. It was until the 1980ies the industrial zone of Salzburg. There were machine productions, textile industry, paper industry, wood industry, a pharmaceutical company and some distribution centers. Nearby also the company of Sony started to produce CDs and the company of Skidata started to produce here.

In the 1990ies the city needed lots of workers and many foreign immigrants ended in the city of Hallein since jobs were available and the people were considered hard working but still friendly. Nowadays the city of Hallein is city that gives lots of opportunities to new startups, new ideas and grows again to a quaint city. Renovations within the city help to see the new structure of the city and the new upraising creativity. This helps to resettle new young people and the nearby university in Puch and Kuchl is even bringing students to this area. The city of Hallein is nowadays starting to become a green area and is starting to publish also the excellent surrounding mountains and the industrial flair is falling of the town but the history, nature and innovation is on the go. 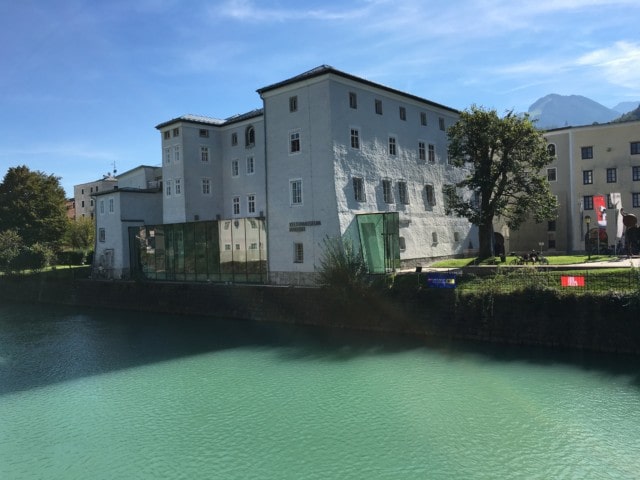 Hallein is the second biggest city in the region of Salzburg. It shows you how new and industrial architecture can fit into a nice charming old town. When you want to see how industries worked already in the middle ages then do not miss out the fascinating and interesting museum of Hallein (Keltenmuseum). You will learn hoe this city is dating back to the celtic times and how the history of salt production and other industries have influences this city and it’s surroundings. Around at christmas time it is a must to see the all year open museum about the world famous christmas song: Silent night, holy night. Franz Xaver Gruber, one of the two composers of this song lived and died  in the city of Hallein. By walking through the town, you will see courts and yards where you see history totally alive, such as the old buildings, the pilgrim’s places, the places where salt was weighted, dried and cleaned.

But also you can see and explore more about this town in the panorama picture in the city hall which is dating back already to the beginning of the 19th century and shows that innovation was always welcomed in this city. As one of the trends to make a round panoramic picture Hallein was one of the first towns in Austria to have it. The longest and the most avantgarde schools, such as the fashion school of Hallein and the Wood school of Kuchl are examples to bring out innovative ideas. The industries and communities welcome these talents and support them by giving them facilities and spaces to create their ideas. In the old salt halls on the Perner island each year several summits take place where artists and innovators can develop ideas under professional guidance and where they can then present these ideas to the public.

a must-see is the celtic museum of Hallein where this fascinating histories shown to you and you can see the history evolving. From the celtic times, starting on the ground floor, to the salt production and how this changed the whole city, on the first floor, over the middle ages until the 19th century where you can see the pictures, done some local artists in the 18th and 19th century on the painted walls the pictures show you what work and how the work was here in Hallein on the second floor where you can also visit the rooms where nobel people and the bishops ruled and slept whenever they were in the town of Hallein to check about the salt production. You will also find lots of hints and artifacts that show you and teach you more about how innovative people were in former times and how this is still influencing our everyday life.

So come and see this city, that is developing newly with lots of efforts and lots of creativities. The perfect combination between history, industry and untouched and powerful nature in the surroundings, such as the Lammertal, the mountains and the woods. 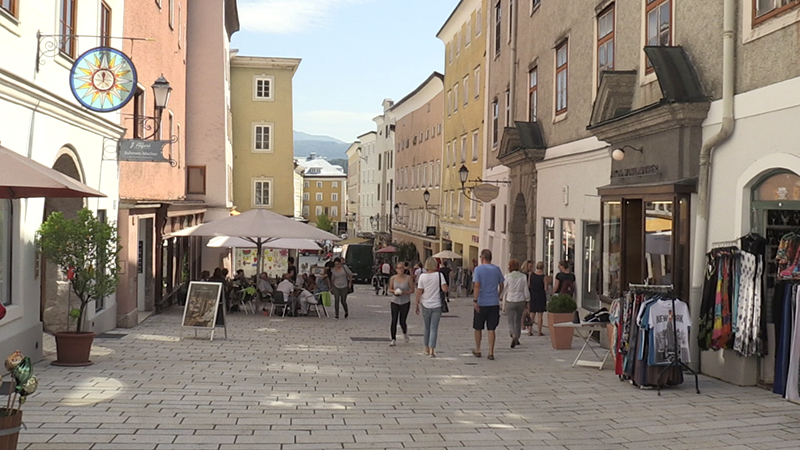 Hallein reflects the salt culture very well and brings you back in time. It also explains a lot about some of our nowadays usage of salt. It shows how salt was important in former times and how it reflects even to nowadays. Since Hallein was also the city where salt was taken out of the mine in a sole water it needed to be heated, dried and cleaned in the city of Hallein. Over many years it needed a lot of wood and therefore the wood has been supplied form the mountain valleys, timber has been cut and then thrown in the river of Salzach to the town of Hallein and Salzburg. But in Hallein a canal was already built in the 16th century to deviate the wood from the rest of the river and to collect it and then dry the book on the sandbanks in the town of Hallein. Nowadays the former canal is still there, dried and used as a new place for the city. Since the 2nd world war it has been transformed into a place for homes, playgrounds for children and tennis courts. At the beginning of the 20th century the longest swimming pool in central Europe was opened with a wood slide and a wood toboggan to jump into the pool and with lots of innovative ideas on how to learn to swim and to have fun in the water. The former major of Hallein wanted to create a lot of new things for this town to take away the fear of the water from the people since flooding were the biggest threat in this town. Unfortunately after the second world war it has been forgotten and taken down since people needed jobs and the industry was very weak. Of this swimming pool still some remains can be found. After the second world war lots of refugees were settled in Hallein, since it was the fastest growing city in Austria and the industry used the perfect infrastructure towards the south and north. Therefore it became the industrial center of the Salzburg region and after a lot of takeovers in the 1990ies the former industry town turned into a forgotten town. Luckily the inhabitants and the region had different plans and nowadays former industrial buildings are used for startup companies to settle there, supports by the universities have been given in Puch and Kuchl and they plan to settle more schools and education places here, since the grounds are cheaper than in the city of Salzburg being only 20minutes away from the town of Salzburg. So take a look at this nice charming town as it increases it’s lifestyle, culture and newly gained self-confidence again. Travel with Be special tours to this town and enjoy the scenic area around this town. 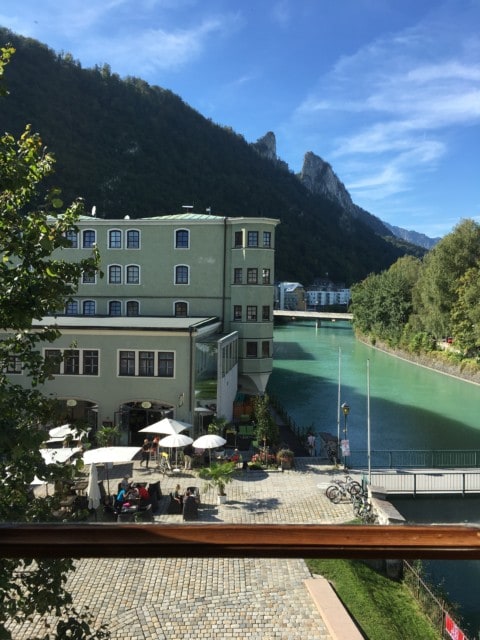 Hallein is nowadays not only the heritage of it’s own history but also a start for new ideas for young entrepreneurs and creative people. You will see this at the local cuisines in the town and you will see it in some locations for artists and new ideas. You will see also throughout the history of the industry in the area as well as the old industrial buildings are used as get together places for students, artists, startups and traditions. But do not miss out to try one of the local beers and take the time to see the surrounding mountains and the Salzach valley, where you can explore the power and quietness of nature. Visit Hallein and learn a lot of this city – history and fascinating stories of medieval time, christmas and vines – bespecialtours!

If you want to enjoy some great time in Hallein, book a private tour to Hallein with B(e)special Tours from Salzburg, or arrive directly in Salzburg, enjoy a city tour with our comfortable vans, enjoy a guided tour through the town of Hallein and continue a nice drive either through Bavaria, or Austria. So if you are planning to come to Hallein, or if you want to Visit the city of Hallein and the scenic mountains, or Berchtesgaden from Salzburg then please do not miss a nice ride with b(e)special tours! It is fun for youngsters and the older ones and you can taste a lot of delicious typical Austrian dishes and of course a lot of Beer! Enjoy the fascinating city of Hallein – Hallein and history – with fresh ideas, food and a lots of fun – Be Special Tours!