100 years of the Salzburg music festival

Each year he Salzburg music festival brings many exquisit and high class musicians to the town of Salzburg. Many famous singers from Pavarotti, over Carreras, to Domingo sang already in Salzburg. Orchestras like the Vienna philharmonic, the Berlin and Dresden philharmonics and many more come each year to Salzburg to perform and to bring some of the highest class classical music into the town.  It is also a very important economical factor for the city and the surroundings for tourism, as well as for all the shops, restaurants, hotels. It is estimated that this could have a value of several hundred millions of euros.

Already in the time of the baroque music played an important role in Salzburg. From the time as the Salzburg’s prince archbishops invited many musicians from all over Europe to entertain them and their guests. Mozart, who was born in Salzburg helped for sure to establish Salzburg as a center for music and as a place for a musician to become famos.

In the year 1920, Hugo von Hofmannsthal, Max Reinhardt and Richard Strauss decided to create a short music festival in the summer in Salzburg, as most of the bog opera houses are closed to hold some outside performances in Salzburg, the former music town. Without the intervention of the former major and patron of the state of Salzburg Rehrl and the archbishop of Salzburg it would not have been possible to get the locations to perform. It all started with the theater production of Hugo von Hofmannsthal’s Jedermann, a theatre that talks about the dying of rich man that still evades the death. The piece has been firstly performed in 1911 in Berlin and is a fix performance each year in the Salzburg festival on the Dom square. At the beginning there were just 5 performance in the middle of August with 2 extra performances for locals outside of the festival week. Already one year later chamber and orchestra music performances were added. In the year 1922 also operas and other music performances were added and the Salzburg music festival became famos also outside the Austrian boarders. The festival took then the whole month of August.

Unfortunately during the years from 1938 until 1944 meant dramatical changes for the festival of Salzburg, as many actors and also performances had the be change or adjust according to the regime of that time and in the year 1944 no performance took place.

Already in the year 1945 in a ver small version the Salzburg Music festival took place. The rock riding school and the small festival house were reconstructed and adapted for high quality performances and more people to attend without lost of quality. In these years there were 3 people that changed the direction of the Salzburg music festival and opened it up for international performances and stars. Karl Böhm (until 1980), Herbert vonKarajan (until 1989) and Gerard Mortier (until 2001). These three people made Salzburg internationally a hotspot for VIPs, international classical music stars and new interpretations that would have never been performed in a classical and non-open Salzburg of that time. One of the most successful festival was in 2006 when all of the Mozart operas and many other music pieces of Mozart have been performed as a contribution to Mozart’s 250th birthday. 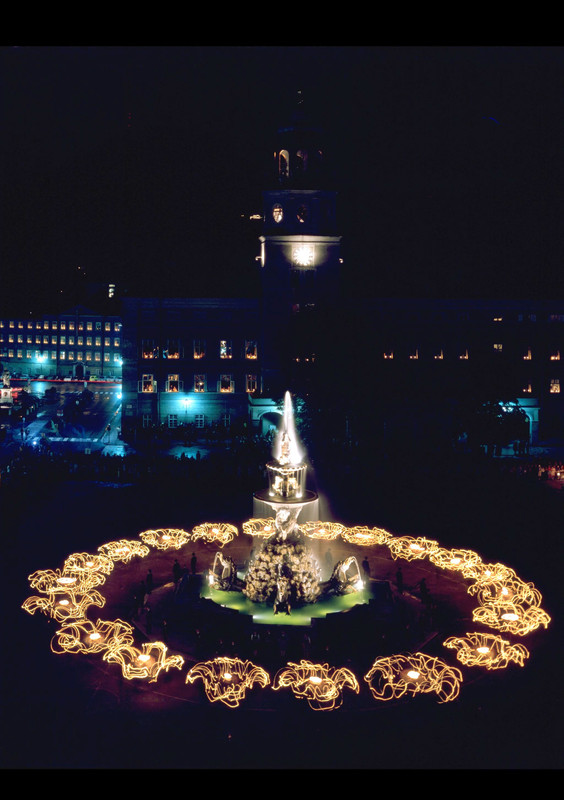 the opening ceremony on the residence square of Salzburg.

Since the year 1992 the Salzburg music festival opened up for your talents, new performances and side plays, such as the Szene, young performance artists, the play of the Moz-Art, the modern theatre interpretations and the Brockhouse for pop and rock music. This is not directly supported by the festival but in a n indirect way. Since 1994 the festival dialog has opened up the new way of performance in Salzburg. 1998 the new fix point of poets as guests has been established. The 2002 young directors project should give young international artists to get their first director’s experience and to show it to a big audience. Since 2007 we have the Youth! Arts! Science! movement so that students from different facilities can work together for new performances and interpretations. One of the most important projects is the 2008 established young singer’s project that supports international young singers to make it to the big performance halls in the world and in the same year the Festival’s children’s choir has been established. The Salzburg festival therefore shows that it is ready for the new generations and for a perfect mix of classical elements with more modern elements. 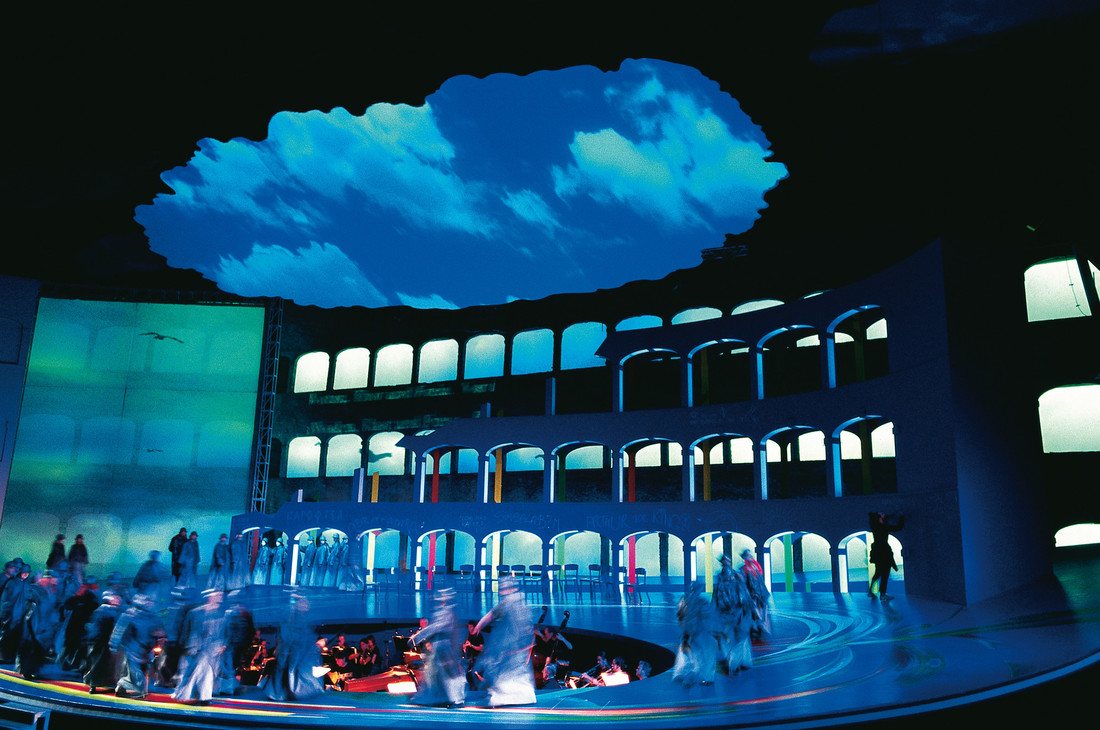 For the centennial production a big program with many performances and new interpretations has been developed and was supposed to take place from the 21st of July until the end of August. It would have been one of the most spectacular and intense program Salzburg has ever seen but unfortunately then the circumstance of this pandemic changed everything and caused many performances to be postponed to 2021. 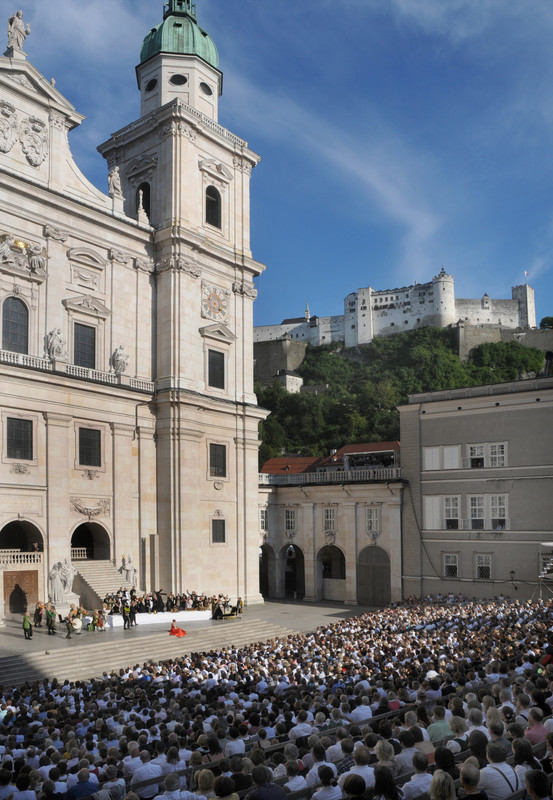 Jedermann at the Dom square in Salzburg.

The festival time in Salzburg is always a special time. This year, with the problematic year of COVID-19 pandemic the Salzburgmusic festival takes place, with limitations to make sure to keep social distancing, with different performances and some changes in the last second but it seems that this festival has to take place not only for the economy of Salzburg but also as a sign of strength and support of artists and music. The Salzburg festival starts on the first of August and will last until the end of August.

The Salzburg music festival brings not only friends of classical music together but also people that invite their business partners and their clients to have a relaxing and great time in Salzburg. The Salzburg music festival is sponsored already for many years by Audi, Nestlé, Siemens and others as some of the main sponsors. Therefore the state of Salzburg and the city does not has to give any financial support.

The opening of the Salzburg music festival is traditionally done by the president of the Austrian state. Tickets are many times sold out already months in advance, especially for important opera performances with big classical music stars. The program of the Salzburg music festival is normally published already 6-10months in advance and the ticket sales starts then some days later. The tickets are given out first to sponsors and supporters of the music festival and then to the public. This guarantees each year waugh tickets for everyone to have the chance to get some tickets. The ticket prices range from 25€ – 400€ and are said that on the black market go up to even 1.000€ and more for the most wanted performances.

The closure of the festival of Salzburg is traditionally done by a ball: A dinner in the residence with following dancing ball at the rock riding school of Salzburg. There is a limit of maximum 1.000 guests per year and many times give people the chance the also talk to many of the actors and singers of the Salzburg music festival with their fans and guests.

We hope you take the opportunity on your visit in Salzburg to hear one of the concerts or opera! We wish you a nice and pleasant stay in our wonderful city and hope you enjoyed the trip into the world of music. Best regards Be Special Tours!